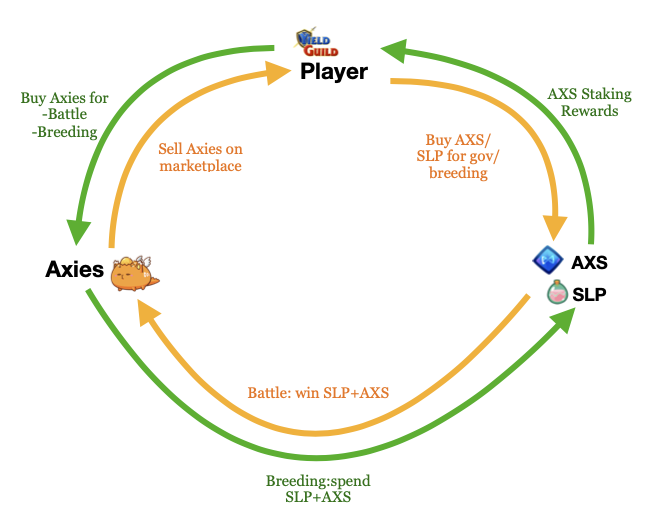 AXS’s sharp correction made it one the most underperforming digital assets among all the top-ranking cryptocurrency. It could also see further declines over the next months due to a combination of fundamental and technical catalysts.

AXS is a settlement token in the Axie Infinity gaming ecosystem. It allows players to buy native nonfungible tokens, which will allow them to create a multitude of digital pets known as “Axies.”

It can also be used as a work token, which players can use to breed new Axies.

Axies are required for new users to join the AxieInfinity ecosystem. They will be able to compete against other Axies. The platform gives them AXS if they win larger tournaments.

To maintain Axie Infinity’s demand, the old players have to rely on new players.

They could also be at risk of old players selling their AXS and SLP earnings on marketplaces (for instance, crypto exchanges), which would add to the downside pressure on their rates.

However, when Axie Infinity’s native tokens are valued lower, it makes the game less attractive to new players. Players would still have to pay Axies for the ability to earn lower-valued AXS and SLP units.

According to data from Dapp Radar, the AxieInfinity ecosystem has been through several stages. Its player count dropped to 8,950 in June, down from 63,240 January. This is a nearly 85% drop. This coincides with AXS’s 80% price drop during the same period.

Simultaneously Axie Infinity’s In-Platform Volume, calculated after assessing its Ronin data, dropped from $300 Million in September 2021 down to $2.12million in June 2022.

The project’s top executives quietly changed their “play to-earn” mission to “play and-earn” with Philip La, its new head for product, acknowledging in his August 2021 blog that “AxieInfinity first needs be a game.”

Axie’s problem lies in its status as a speculative tool, wrapped in rhetoric about community and fun. It should be relegated to a game by its developers, which is something most people have never seen it as. The earning stops and the playing stops. 12/12

Fresh inflation data has further dampened upside sentiments across top-ranking cryptocurrency, which in one way or the other boosts AXS’s bearish outlook.

Notably, the U.S. Consumer Price Index (CPI) rose at an annual rate of 8.6% in May, compared to 8.3% the previous month. This raises investors’ concerns that the Federal Reserve may increase interest rates aggressively in coming months. This would push riskier assets lower.

AXS fell 7.5% following the publication of the report on June 10. It then dropped another 7% on June 11, to $16.79. Axie Infinity could suffer further losses due to the Fed’s hawkish policies and the possibility of lower cash liquidity.

Key support for AXS falls below the AXS price

A string of negative fundamentals have driven AXS’s prices below a key support level. This could lead to further downside movements in the coming weeks.

AXS fell below the $18-$19 support zone this week which helped to cap its downside attempts since May’s beginning. The range was also tested as support. This had been followed by a bull run of around 800% between July 2021 & November 2021.

The path of least resistance now looks skewed towards the downside for AXS with the next downside target at $9 by September 2022. This is more than half the price today. Notably, resistance was at $9 during the April-June 2020 session.

A bullish cue is AXS’s potential “descending widening wedge” (DBW), pattern on the weekly timeframe. This pattern is confirmed by the token’s fluctuation between two falling, diverging trendlines.

Traditional analysts view DBW to be a bullish reversal structure. This pattern is resolved when the price breaks above its upper trendline and rallies as high as the pattern’s maximum height as shown in the chart below.

If the pattern is confirmed AXS will rebound on the path to $465 in an unspecified timeframe, almost a 2,500% increase over today’s price.

These views and opinions are the author’s and do not necessarily reflect those of Cointelegraph.com. You should do your research before making any investment or trading decision.